Follicular unit transplant or FUT technique in Lahore is still considered good technique but modern and latest FUE hair restoration technique has replaced old one. In modern Era F.U.T. Technique is the most evident Buzz word. Why is that? Let’s see. Every man that has lived on this planet has wished to look flawless and extremely attractive. Young men are staunch followers of having an appealing look above anything else. Dark hair is virtually “THE EVIDENCE OF YOUTH”. No one wants to look old. Right? But what happens if someone is suffering through a medical condition that makes him lose hair. A patient or a person suffering from HIDRADENITIS SUPPORATIVA can’t do anything of their hair loss. The most common type is male pattern baldness . There is no stopping to it. If you think no ray of hope can breakthrough your window of despair then hold on tight. Here comes the savior that is FOLLICULAR HAIR TRANSPLANT TECHNIQUE (FUT). It is a safe procedure which will bring back your days of beauty and ultimate youth. Let’s run through some pages of history to know how it all started. This issue had plagued mankind since ages. It was the year 1897 when a guy named Menahem hodara treated a patient by transplantation technique. Different techniques were used in Japan in mean time. However Dr. Norman Orenteich from New York City was the first doctor to successfully carry out hair restoration surgery back in 1952. Since then every year numerous men across the globe make attempts to rejuvenate their scalps and skins. 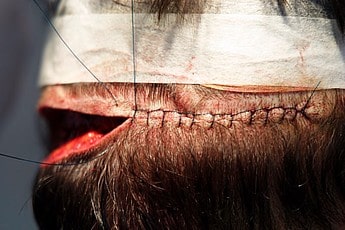 Follicle hair transplantation technique (a minimal-invasive procedure) is the result of evolutionary procedures in the field. It can be carried out in 2 ways. Strip harvest method and the Follicular Unit extraction (FUE). The difference between the 2 lies in the tissues transplanted. In former technique skin graft from donor site is transplanted while in the latter clusters of hair with roots are transplanted. It may be a single sitting or a multiple sitting procedure.

FUT hair transplant in Lahore is claimed more grafts and better result. The fact is FUE technique can extract more grafts due to larger donor area and results are equal in both techniques. However FUE procedure requires more skill and expertise while extracting graft from donor area would not be damaged. In the 1st step donor site is prepared which mostly is the posterior scalp of the patient. The area selected, trimmed and then anesthesia is given at the donor site. The skin strip or individual graft (mostly 1-4 hair) is removed from the site depending upon the technique. Next step involves doctor making fine incisions on the recipient site (after giving anesthesia) which are irregular while the assistants dissect the skin graft with the help of microscopes to remove the fatty layer from it. However in unit extraction no sectioning is seen as hair clusters are directly transplanted into the recipient site via micro needles. In skin harvest doctor sutures the skin which can be removed 10 days later. However this technique results in a thin scar being created on the donor site. Follicles are placed in the bald area. You just need to be little careful of those hair. Shampooing can be done three days later but with care. Give the skin time to heal and adopt in the recuperation time. Be careful to avoid the “shock loss effect” which may cause you to lose hair by aggressive handling of the new seedlings in your head making it all go in vain.

Follicular hair transplant technique is a ray of hope and ultimate solution for many and should be adopted due its good results.